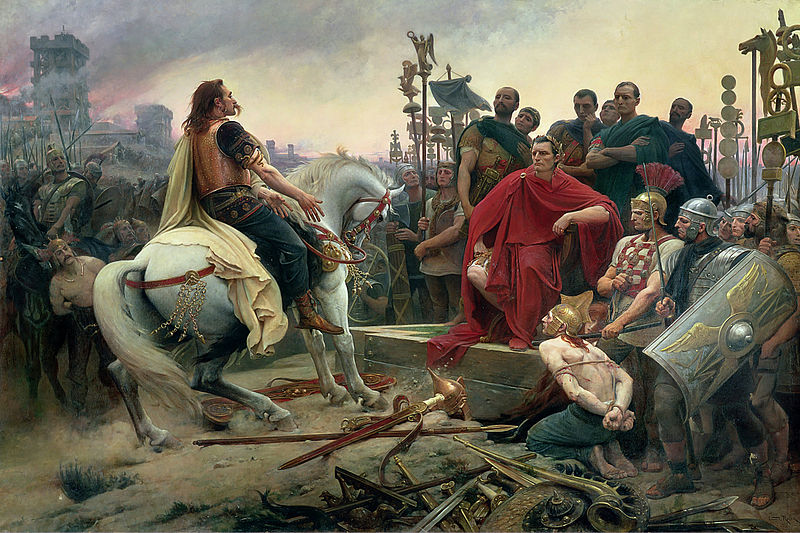 He conquered Gaul, modern France, breaking down what the Romans considered overpowered barbarians beyond the Alps. Almost doubled the republic size and increased its political area of influence for taxation and land ownership purposes, significantly. This was a turning point. The moment he became, not only part of a long list of consuls and influential figures, but a transcendental champion of antiquity. Then, he fought a Civil war against his old allies. With ruthless effectiveness put out fires in Hispania and Asia Minor while crushing them before heading to Egypt where he negotiated a peace treaty with Cleopatra that assured harmony in the region. Ending once and for all any legitimate civil war restitution while crushing the Numidians in the process.

Finally, in the summer of the year 46 BCE, Gaius Julius Caesar, returned to Rome a victorious general after more than a decade of fighting, to unprecedented political power, while all his military opposition was squandered. This precise moment, when Caesar returned to Rome, was a major turning point in history.

Yet, while his most notorious political and social accomplishments and reforms during this summer are well documented and easy to link to the degradation of the Roman Republic into an Empire; it was a super-secret project that captured the imagination of Caesar and sent waves through time – even to our days. And could be, arguably, of all of his reforms the most impactful. We are referring, naturally, to the Roman calendar.

Up until that summer, the roman republic followed a lunar calendar that shadowed the faces of the moon. This means a year of 355 days that fell out of sync with the seasons by losing around 10 days each year. A small detail the Romans could easily track and fix by adding days to the calendar every other year, or whenever the religious authority would pertain feasibly. Being the responsibility of the Pontifex Maximus (the head of the principal college of priests in Rome) to monitor this drift and add days to the calendar as needed. Yet, the current Pontifex Maximus happened to be Julius Caesar itself. And, as we know, the triumphant dictator of Rome spent the last 15 year far away campaigning, fighting and plotting. As a consequence, the Roman calendar was 3 months out of sync. As far as calendars are concerned, is a catastrophic failure: the last day of the year was at the end of summer and the beginning of the fall.

But Caesar consumed the better part of the 47th year BCE in Egypt where he learned, from a local astronomer called Sosigenes of Alexandria, the way the Egyptians managed their calendar. A more precise timetable that followed a nearly perfect 365-day solar schedule. So, Julius Caesar enlisted the help of Sosigenes and brought him to Rome were together designed a new Roman calendar loosely model on the Egyptian system.

So both Caesar and Sosigenes started enlarging the calendar to 365 days, modelling after the Egyptian reference, but the Egyptian calendar had a flaw. They evenly divided the year into 12 months of 30 days, which adds up to 360, and the local political administration had to manually add 5 extra days at the end of the year. Those manually included 5 extra days were a problem since under the roman system these days were being managed by the Pontifex Maximus, and if managed incorrectly, the calendar would drift again. Caesar, on the contrary, wanted for the calendar to be on auto-pilot.

The solution was to take those extra 5 days and sprinkle them around the year to create uneven months of 30 or 31 days (The first, third, fifth, seventh and eight months would have 31 days). Since February was considered unfortunate for superstitious reasons they bump it back to 28 days as before, scattering those extra 2 days into the tenth and the twelfth months. Yet according to Sosigenes, even this almost perfect calendar was slightly out of alignment since it was not fully matched the actual length of the year which they knew is of 365.25 days. However, Caesar invented a system in which an extra day was added every 4 years, to February, automatically. And communicated emphatically that this was not a manual administrative task the Pontifex Maximus had to do. It was very clear that this would be an automatic process away from the hands of the senate and the politicians.

With that, the Roman calendar was complete but Caesar still faced a problem. The current date was still 3 months out of alignment. So, to bring the Roman year back into placement with the seasons, the Pontifex Maximus, Dictator and more important figure in the history of Rome; just needed to flex his political muscles slightly: he inserted 90 extra days into the year 46 BCE, making it 25% longer than a regular year. This means that Julius Caesar created, with 445 days, the longest year in human history.

Julius Caesar not only conquered Gaul and gained unprecedented military and political power in Rome, but created an automatic mechanism that lasted for more than 1500 years and survives, with minor modifications, to this day. He did it by taking the responsibility out of the hands of politicians and religious figures. Which tend to be a great human achievement.