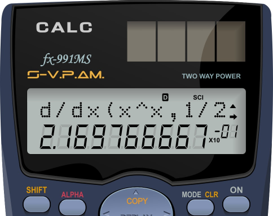 When we think of mathematics shivers come crawling inside our bones, at least for most of us. Hazy memories of school days and boring non-sense numerical exercises based on complex rules that produced volatile grades. Yet, some aspects of mathematics can be inspiring and at the same time can destroy our perspective of maths as a boring and complex apparatus. We can always start with a simple question:

What is the biggest number you can think of? Our educational development can be traced to the answer that question. When we are younger we go from 3 to 17 to 100 if we are the cool kid in pre-K. Then we can understand the concept of thousands, millions, trillions and finally be in peace with the fact that the real number line does not end. We are released into the work-place and forget about the stuff.

As adults, we can re-frame the conversation and re-think our perspective on mathematics, and large numbers are a good place to start since it appeals to that child-state from a time before the shivers and nonsense. Yet, some numbers are special, and we assign names rather than a figure to those like Pi or Avogadro, hence the most special of all the large numbers is Graham’s Number.

Graham’s Number is famous since it is bigger than anything the savviest of non-mathematician adult can come up with. It is just unbelievably large. In fact, is so large that if you could fully comprehend its size your brain would literally collapse into a black hole and no, that is not hyperbole. There is not enough space in your skull to grasp how massive this is. Yet, we will foolishly try.

First, a glimpse of context. For the longest time, Graham Number was the biggest number that’s being used in a constructive way – that is, in a mathematical proof to describe a factual event. So, it had the record since the 1960’s up until the XXI century as the ‘biggest number’. It does not hold the record anymore but is the most special of those large mammoths. Plus, the new rex of the numbers called Three(3) it does not offer the appeal of explaining its size for its too ‘out there’ to comprehend.

But let us continue with the original question: ‘What is the biggest number you can think of?’ so we can compare that with Graham’s Number and so, we can start our journey to the stratosphere of practical numbers. Now that you have a number, multiply it by the number of elementary particles in the universe, which amount to something like 10 to the 80th power or and the operation will look something as follow:

How to Write Graham’s Number?

Now, before we attempt to miserably fail in our mission of grasping Graham’s Number we need to learn a special notation first to write it. That is how big it is and, this way, we can commit to paper (or screen) large figures without running out of inches (or bites). The notation we will be using is called ‘arrow notation’ and is no more than a glorified form of raising a number to a power, which in turn is glorified multiplications. This is how arrow notation looks like:

Now, let’s turn up the stakes and discover what 3↑↑3 is. Easy enough we just need to add a three on top of the original raised three like. And it just means 3 multiplied by itself 27 times, since you just resolve the operation top to bottom. And 3 raised 27 times is trillions:

So, this is a series that went from 3 to 27 and then, trillions. That is a cool progression. At this point you can go wild – how many 3’s can we stack there, which is the same as asking, how many arrows do you want? If we just add one more arrow we end up with a number that is mind-bending large since 3↑↑↑3 =

So, let’s call 3↑↑↑3 = ‘mind-bending big’ although we are placed at a microscopic sight of the splendour that Graham Number is. But at least we have the notation in control and we can start to grasp the magnificence of Graham’s number. Let’s step back and delve into the grandiosity and monstrosity of this number by reviewing what Ron Graham was trying to accomplish when he built this categorically enormous beautiful digit.

Most people would not have a problem if asked to draw a square, they just connect 4 vertices or corners to the closest 2 next vertices and voila, we have a square. Now let us suppose we draw a four corners or vertices shape like a square in two dimensions and we ‘complete’ the drawing by adding two more lines to connect all the vertices or corners diagonally. How many lines connecting the dots we have? Six.

2. This is just a square with all its corners or vertices connected.

3. And this is just a square with all the lines that connect the vertices numbered (In combinatorics those are called edges). We have six of them:

From a mathematical perspective and specifically in Combinatorics (the study of combination via counting) the previous examples are not very interesting, nevertheless, if we start colouring the lines between the dots –the edges between the vertices— with different colours we have a different problem. For example, in two dimensions we could draw our lines as follow (and in any other combination that includes two colours):

This is an extremely simplification of the problem Ron Graham was working on when he discovered his magnificent number, yet, he was not only working in two dimensions but trying to learn how many dimensions are necessary until you cannot paint four dots or vertices with six lines or edges with two different colours. Highly abstract, but the mathematical proof was needed nonetheless. So, the name of the game is to be able to avoid painting whole squares with its 6 edges or lines connecting all its vertices with the same colour. In short, we want to avoid these:

Can we win the game in two dimensions and paint an all-the-same-colour square? Well, we just did in the image above. What about three dimensions? The picture is not as clear when we draw it, but we still can:

And this is true also in four dimensions, and in five dimensions. We know with certainty that we can avoid painting a whole square with all the vertices being the same colour up to thirteen dimensions. And Grahams Number is the upper bound of dimensions to that prove. In short, the answer to the problem lays between 13 and Graham’s Number. We know with absolute certainty, thanks to Ron Graham, that beyond Graham’s Number is not possible to avoid painting four dots with six lines with two different colours. The thing is, the number that Ron Graham gives to the world is a giant. Matt Parker, one of the most prominent mathematicians and creator of the revolutionary Parker Square (go google it – he is awesome), described it best (…) “as far mathematicians are concerned, a proved that is between 13 and the biggest number ever used constructible is quite precise; because Graham’s number is still smaller than infinite – so frankly, we pretty much nailed it.”

Enough context, now we can truly construct and appreciate Graham’s number, feeling in love with his beautiful magnificence in the process. Furthermore, we have to retake the arrow notation we learned a few minutes back and continue the expansion of arrows while paying special attention to how the progression grows colossally:

This is our current level, at a number we cannot even comprehend let alone write. At this stage is just where Graham starts showing its secrets. So, let’s add another arrow:

If we had mind-bending big before, with g1 we have mind-bending big on steroids that is just off the charts. If we try to write it, the stack of 3s goes further than the edge of the known universe and that is just the written part. The actual number is absolutely enormous. But we are not close to Graham’s Number. Not. Even. Close.

To construct g2, which is the next number on this progression, we need to add g1 of arrows in between the 3s. That’s right. We are in uncharted territory now. If g1 was something crazy and there was no way to describe it in a common-sense way, then g2 is like nothing we will ever encounter. There is something almost philosophical or godly with the size of this number. Here is the graphical representation:

And yet, we need to keep going.  mind-bending big on steroids of arrows between the threes is a child’s game when we get to g3 since we got to put g2 (again, this is just the number of arrows) in between the 3s. At this point, comprehension was left several steps before and language, words themselves, are insufficient to describe the size of what we are talking here. Incommensurable? Bigger.

You get the idea. Yet, we are still underground when it comes to Graham’s since we need to keep building this progression of numbers where the next one gets a number of arrows equal of the previous ones so we keep building and building until up at some point, after what is an impossible to measure physically progression, we reach our destination (In the following lines, each dot is a new ‘g’ level) :

G64! It could be unsatisfactory, feeling almost a cheat. We do not know the first digit of Graham’s Number (the last one is 7) and it is not even the final number for the proof but just the upper bound of dimensions of the prove. And still, it is a number that feels world-shattering. It gives us a glimpse of a perspective so big that nothing in the physical universe gets remotely close to it, not even the volume of the known universe in the smallest measurement way (A laughable 4.65×10185 Cubic Planck Lengths that compare to Graham’s is just silly) can get remotely close to it. It is exorbitantly abstract by dealing on dimensions and yet, it has an appeal to it that no science fiction narrative could provide, mainly because sci-fi authors are incapable of imagining something that big.

Graham’s Number is what we should be taught when we approach mathematics for the first time, not necessarily large numbers per se, but the reflation of Graham’s in all mathematics as an example of interesting and thought stimulating processes that help us both to be better at our lives and bring us joy.

Graham’s number is an extremely good example of how the storytelling of mathematics could be assessed since it explains what math’s really is: a language able to shatter our mind’s limitations.